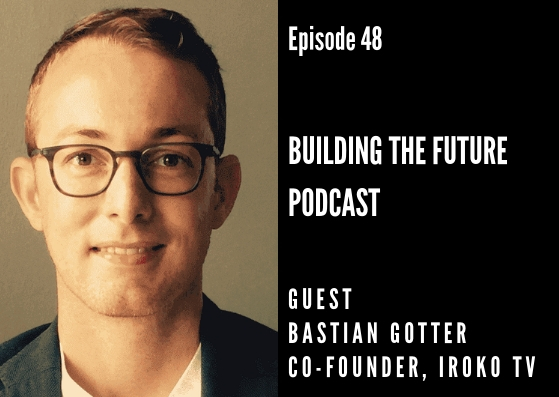 Bastian Gotter is the co-founder of Iroko TV, one of the earliest, most successful and largest video on demand platform for Nigerian movies.

Bastian founded the business alongside with his university flat-mate, Jason Njoku, who is the CEO of the company, and a later guest in this show.

This is not Bastian and Jason Njoku’s first project together. In mid-2010, Bastian invested in several businesses that Jason was running in Manchester, England, many of which failed. But they stuck together as partners and Bastian invested in Iroko TV after Jason started it, and he then moved to Lagos and joined as a full-time co-founder.

This episode is the second of 2-part conversation I had with Bastian in Cape Town, as part of the mini-series on African video  on demand platform. Listen to the first part here

In this episode you’ll learn:

Building The Future Podcast Season 3 is sponsored by Flutterwave

Flutterwave drives growth for banks and businesses across Africa through digital payment technology. You can learn more about their activities here.

More from this show

My guest today is Sangu Delle. Sangu is an entrepreneur, an investor, author, and someone who is deeply rooted in Pan-African ideology. His...

My guest today is Andrew Alli. Andrew is a real-life and virtual mentor to a lot of investment professionals in Africa. He is the Partner...

#72, Eloho Gihan-Mbelu – The challenges of building startups to scaleups in Africa

My guest today is Eloho Gihan-Mbelu; she is the founding Managing Director & CEO of Endeavor Nigeria. Endeavor is a mission-oriented...

My guest today is Tokunbo Ishmael. She’s the co-founder and Managing Director of Alitheia Capital, an African focussed PE and VC firm...

My guest today is Eric Idiahi. Eric is the co-founder and partner at Verod Capital, a private equity firm based out of Lagos Nigeria. Verod...

My guest today is Nnena. Nnena is a Principal at Digame Investment, a growth capital investment firm that back tech-enabled businesses in...